As you may or may not know, I recently moved to Manchester, and this meant that I had to move my studio with me. What fun that was! Luckily, it’s all set up again now, and I have a bigger studio space than before. What’s in there? Take a look: 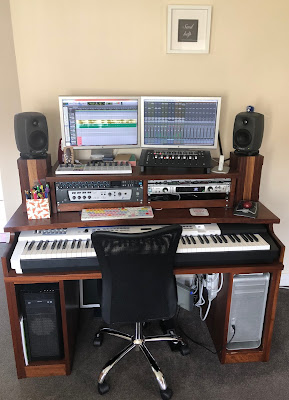 Custom desk, studio equipment and a “Send Help” picture given to my by my brother Dan and his wife – apt when there’s a tight deadline and the computer isn’t cooperating!

Let me take you through the setup. I work in a programme (known as a digital audio workstation, or DAW) called Pro Tools, which you can see on my screens. This handles the video, audio and MIDI (the signals from my master keyboard), and allows me to record real instruments or use virtual instruments and sample libraries. 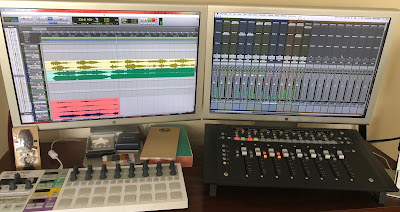 Pro Tools has two windows: Mix and Edit. They make it quite simple to use – one reason I love the programme. The Edit window is where you input all the data – like MIDI and audio files, time signatures, and tempi – and then edit it as needed. 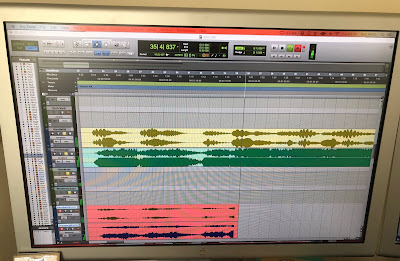 The Mix window is where you can, well, mix the music (more on that later). It is also the window you use to put virtual instruments and effects (like delays or compressors) onto tracks. 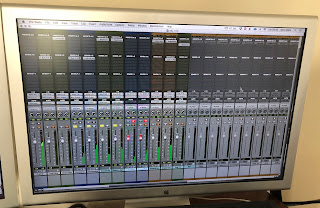 Next to my computer screens, I have my monitor speakers. I use a set of Genelec 8020As, which I love. They’re great for writing and doing rough mixes, which is exactly why I need them. They’re real workhorses – I got them in 2005 and they’re still going strong! 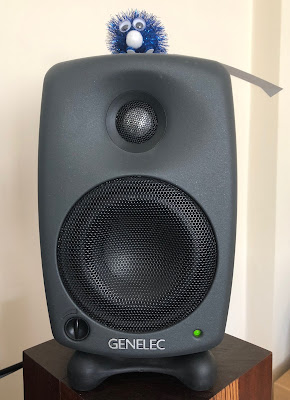 Graeme sitting on top of a Genelec 2080A

Under my screens, I have an Arturia Beatstep Pro, which I use mostly for drum programming (by playing the grey pads in different patterns). There are all sorts of twiddly knobs and buttons on it that I’m yet to get fully to grips with, but it’s a great bit of kit.

Next to the Beatstep Pro, I have my Avid Artist Mix. This is a mixing desk made by the same company that makes Pro Tools. This allows me to mix with actual faders, which have a much nicer feel (and are much easier) than using a mouse to move the virtual faders in Pro Tools. 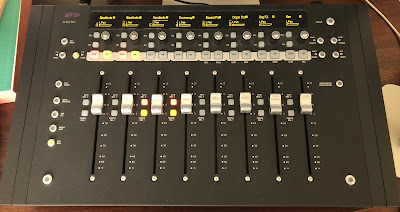 My screens, the Artist Mix, and the Beatstep Pro all sit on top of a rack unit holding my outboard gear (anything external to the computer, like amplifiers or modular synths). What’s in mine?

On the right, I have an M-Audio Midisport 8x8 and a UAD Apollo audio interface.The Midisport 8x8 is connected to my master keyboard (see below) via MIDI and to the computer via USB, so that I can record straight into Pro Tools. The Apollo is connected to the computer via Firewire and lets me hear what Pro Tools is playing, as well as plug in microphones and record real instruments. You’ll notice that there’s a gap in the right-hand rack; that’s where there should be an Eventide Eclipse, a great effects unit that adds all sorts of delays and reverbs. (GIVE ME BACK MY ECLIPSE, DAN!) I used it heavily on my score for Stormhouse.

Top to bottom: M-Audio Midisport 8x8/s; UAD Apollo Quad; gap for my Eventide Eclipse (seriously, Dan, give it back).

On the left I have a Focusrite OctoPre MkII Dynamic preamp and an Avid Digi 002 Rack. You plug microphones into the OctoPre so that you can record instruments. (“Isn’t that what you said the Apollo does?” Well, yes – the OctoPre is mostly a backup nowadays.) The Digi 002 is the first audio interface I ever owned. Made by Avid, it was linked into Pro Tools when I got it, but now it’s another emergency backup.

In front of the rack unit is my Kensington trackball mouse and an EditorsKeys keyboard. I use the keyboard because it has all the shortcuts for Pro Tools marked on it. It’s very handy if I have a memory blank and can’t remember what to press for a certain command. Below that, I have my master keyboard. I use a Casio PX-5S stage piano. The keys are fully weighted so it feels like playing a real piano – great for getting proper expression into the music.

Right at the bottom, I have the computers. I currently run a 2009 Mac Pro with 32 GB of RAM and 18 TB of hard drives (half of which which is just for samples). I use OS X El Capitan (if it ain’t broke, don’t fix it). And, speaking of not fixing what ain’t broke, I also have a PC linked to the Mac using Vienna Ensemble Pro, a networking programme specifically designed for studios. That still runs Windows 7! 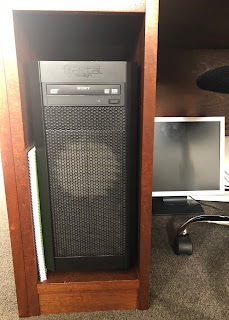 Custom PC with its little monitor hidden under the desk. In case you were worried that 8 TB wasn’t enough samples, almost all of the PC’s 6.5 TB of hard drive space is… guess what…

Finally, it all sits on (and in) a custom desk made by my brother Joe. There’s a lot more furniture (drawers and cupboards) that is spread around the studio now, rather than all connected as it was in my old studio space – you can see it all in a blog post from when I first got it, many moons ago. It’s gorgeous and works much better than adapting a shop-bought desk. I haven’t got any acoustic treatment up yet; that will have to wait a bit.

So, there you go. That’s my studio. I might go into more depth about things in a future post (I’ve already promised one about sample libraries and virtual instruments… must get on that…).

Just a quick post this time. I'm currently reworking the Dracula score for a library album. For this, I'm having to either edit down or expand existing tracks to fit the library album format (yes, I know – I keep mentioning library albums and not explaining them. I promise I'll write a post about them soon!). Here's a little video of me adding a few extra bars of piano to one track. Enjoy!