I am back from LA. Yay for LA! What a fabulously bonkers place it is. I do love it.

Hopefully, I saw some of you at Gallifrey One – and, if not, maybe I will next year (if they’ll have me back)! For those of you who don’t know, Gally is the largest and longest-running annual Doctor Who convention in the world. And what a lot of fun it is! Shaun and his team do an astounding job, from the breadth of panels, the variety of guests, and the way guests and attendees are looked after to the inclusive, safe space they create.

This year was a busy one. I started off on a panel about the Buffy the Vampire Slayer “reboot” with my partner, Mick, which was a lot of fun. Lots of people with great opinions and knowledge of the extended world of Buffy from the comics to the novels – and a lot of great discussion about what people would like (and not like) to see from the TV “reboot”.

I then had a great time on the main stage with Mark Ayres and Blair Mowat talking all things musical in the world of Doctor Who. The lovely Edward Russell guided us through it and kept us in check. It was interesting to hear Mark’s and Blair’s experiences and how they differed from mine. The one thing that was definitely consistent was the feeling of being a team, a family even, when working on the Whoniverse. It’s a very special thing.

The annual music panel was next. Again with Mick and his friend Ramie – the two of them started the music panel at Gally nine years ago, along with two other friends who sadly weren’t there this year. We’ll have to think of something special to do for the tenth anniversary next year! We were with our friend Kat, Doctor Puppet composer Scott Ampleford, and a lovely fan called Brian whom I first met at The Attic (the tenth anniversary convention for The Sarah Jane Adventures) a few years ago. We chatted about the new series of Doctor Who and, of course, focused on Segun Akinola’s new take on scoring the show. There was a lot of love in the room for him, even if I do look angrily animated in this photo… I think I was saying how I love that Segun doesn’t crash all over dialogue with heavy drums…

Following on from that was a kaffeeklatsch with me, Mark, and Blair. These are possibly my favourite thing to do. It’s a small group of about 12 people who come to have a coffee and a chat. It’s informal, friendly, and really good fun. This one was interesting. I think it was as much fun for me to just get to chat nerdy music things with Mark and Blair as it (hopefully) was for the attendees. There were some great questions about things ranging from technology to composition process and the three of us got to tell some of our favourite stories and generally have a good laugh. Mark was a little late and there ended up being no seat for him so…

I also did a few signing, which I still find a strange concept. Mick edited my name card to let people know who I am…

This actually came from a conversation in the lobby with a very lovely guy who, when he found out that I’d worked on The Sarah Jane Adventures, said, “Oh! You’re a minor celebrity, then.”


Finally, the closing ceremony – also a lot of fun. The guests all parade onto the stage and say a little something about their weekend. It’s lots of thanking Shaun and the team (rightly so!) and thanking the fans (also rightly so!). I usually attempt to be funny – not always the best idea; this year I think I said I was sad about the fact that it was the last year at the convention with the carpet. We all love the carpet. Look at this beauty!

Next year, they will be auctioning off sections of the carpets from the convention floor (well, not actually off the floor itself). I may have to save up and bid on one.

The closing ceremony also lead to a very silly thing on Facebook. We ended up posting a picture back and forth with more and more marking up done on it in a game of spot our friends/spouses/selves:

Aside from my own programming I also attended a couple of things Mick was doing, starting with a a panel about science (with our mate Rod – everyone should have Rod in their lives; he’s truly one of a kind), which was fascinating. He also led a workshop on scientific realism in sci-fi, which was so much fun, fascinating, and a really big hit.

Mick was mobbed in the corridor afterwards. Hopefully, he’ll be able to put it on again next year.

I was also dragged on stage by Tony Lee to moderate a panel on writing audio drama with Lisa McMullin, Tony, Simon Guerrier, Darin Henry, and Lance Parkin. That sort of spontaneity sums up both Tony and the things that happen on panels at Gally.

We also got the chance to catch up with friends. We had a very pleasant lunch with Richard Dinnick (a truly lovely man with whom I always enjoy spending time, and I’m not just saying that because I want to work with him on a show…), as well as chatting with Tony Lee while he demonstrated his new iPad’s drawing features on us. 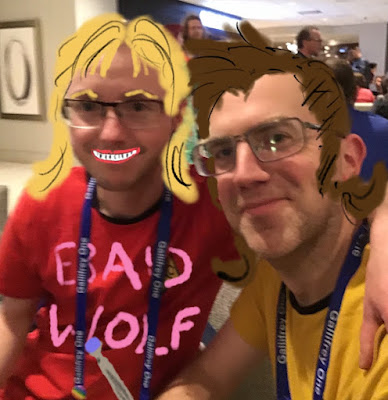 We always have a laugh with Tony; he’s a great example of how genuine and caring the guests at Gally are. Simon Guerrier is another example of this. A fun chap to sit and chat with. It was also great to catch up with Audry Taylor and David Wise, a “relationship goals” couple if ever there was one.

Making new friends is always easy at Gally. This year, we met Lisa McMullin. Lisa is a wonderful writer and one of the funniest people I’ve ever met. It was a true joy spending time with her. I would put her in the same category as Katy Manning – those who leave you feeling happier and richer. Speaking of which, we managed to fit in a hug with the lovely Katy too. One of life’s unstoppable forces, Katy is one of those people who makes everyone feel welcome, happy, and loved.

LobbyCon, as it has become known, is possibly my favourite part of the convention. Hanging about and just chatting with anyone and everyone. You meet so many great people and it’s often the only time you have to catch up with friends. We managed to make the White Elephant Gift Exchange again this year – it’s run by our friend (and honorary godmother) Anna. She has a couple of fantastic shops in Santa Clara which she runs with our other friend Mark – if you’re there, you must go.

If you’re not familiar with it, a white elephant gift exchange is such a fun thing: you bring a gift, if you can (if not, Anna and Mark bring spares!), and you take turns picking one. They’re all wrapped, so you have no idea what they are. Each gift can be stolen twice, which adds a fun element. The gifts we brought were hotly contested by a couple of our friends – who wouldn’t want Star Trek Trivial Pursuit on VHS? I picked a bag that contained a stuffed narwhal. I instantly fell in love and hoped that nobody would steal it from me (fun fact: I love whales). Luckily, they didn’t, and he now lives in our living room. He’s named Shaun after the convention’s founder, naturally.

It was also a great pleasure meeting Chase Masterson (I know, Leeta! I did have a bit of a fanboy moment). We love her charity, Pop Culture Hero Coalition – it’s such a great idea and really makes a difference. Hopefully we’ll be able to help her bring it across the pond and do some good in the UK, working against bullying, racism, misogyny, homophobia, cyber-bullying, and other forms of hate. We will get around to emailing you, Chase, I promise...

Outside of the convention we got to have a little downtime, luckily. Our friends Jennifer and Blake came with us to Disneyland. What a place! Luckily, it was terrible weather, so it was really quiet and we got to go on loads of rides. My favourite was the Indiana Jones ride. It was a lot of fun and great to spend time with friends whom we only see once a year.

We also went to Manhattan Beach with Chris and Kat. The weather wasn’t the best, but we still had a great time eating seafood and ice cream – not together, obviously. That would be gross.

On the last morning we went for breakfast with Mark Ayres and his lovely wife Nicki, along with Edward Russell and his adorable husband Gareth. It was a very civilised way to end the week. Great company and a good few laughs to end our time in LA. We even got to wait about for the planes with Mark and Nicki, which certainly made the time fly.

Well, now that you know absolutely too much about the trip to LA, I’ll leave you in peace. Have fun, and I’ll be back soon with more (un)interesting stuff.

P.S. Thanks to Mick and Audry for the additional photos.
Posted by Unknown at 12:19 No comments: