Last week (on the 18th and 19th April), as you probably know, I went into Script at the Tileyard in London to record a couple of albums.  It was so much fun.  Sorry I'm only just getting around to blogging about it but as you know, I'm a bit rubbish at blogging.

So, we did two days.  Day one started at about 8am for engineer Joe Rubel and the studio assistant Reece.  My brother Dan (who was along for the ride but also made loads of helpful take and performance notes as well as buying loads of biscuits and cake for us to eat even though he was on a diet and couldn't have any of it) and I joined them shortly after.  The quartet arrived at about 9:30 and we set off recording across three sessions (10-1, 2-5 and 6-9), which made for a very long but enjoyable day. 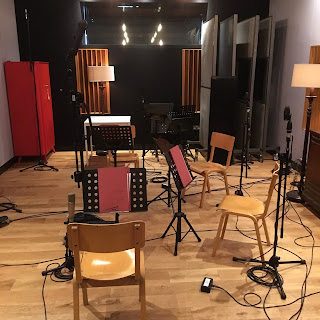 Script Studios set up ready for the quartet to come in and record.


Cellist Peter Gregson put together a fabulous quartet for me, including himself.  On violins were Sara Wolstenholme and Kirsty Mangan and the viola was played by Laurie Anderson.

We started the day recording the strings for my semi-concept album.  This was all done to click so that the players could be totally in sync with the electronics and programming that I'd prerecorded.  It was really nice to have the time to do plenty of takes and cover the performance fully while feeling relaxed and having fun.  There was plenty of joking around (especially between Peter and Joe).  I think it's really important to make recording sessions fun.  After all, it's the best bit of the job, it should be the most enjoyable - and enjoyable for everyone.  Recording for a film or TV session is great fun but comes with pressures of time restraint, cost restrictions (not that I had an endless budget for this project) and the fact that you have so many other people (namely producers) to make happy. Now, I'm not complaining, I love it.  One of my favourite parts of the job is when the people commissioning you to work on their project beam a big smile and tell you you've nailed it.  However, it was really refreshing and quite liberating to know we had the time to just enjoy it. 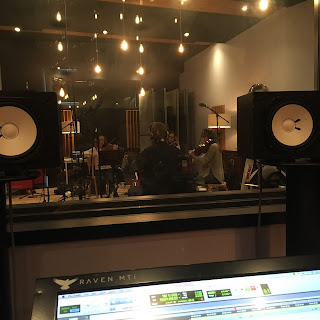 
We popped for dinner at a local pub.  We all got our food except for Sara.  Hers turned up 10 minutes before the evening session was supposed to begin.  I felt awful for her.  She asked for a takeaway box for half of it and shoved the other half down as quick as possible.  I doubt it will go down in her memory as one of the most pleasant meals she's ever had.

For the evening session Angus MacRae joined the quartet on piano to record a piece for the second, completely acoustic album.  It was an interesting challenge, Angus was in a booth so that we had good mixing separation between the quartet and the piano but this meant that he and the quartet had no line of sight.  They had to play completely from feel.  It was amazing to watch and hear.  They totally nailed it and after a few takes were really in the flow of it.  It goes to show that if you get great musicians in anything is possible.

Once we'd recorded the piece with Angus we went back to record the final track for the first album before heading home for a well deserved sleep.

The great thing about recording across two days is the fact that at the end of the day you can just go home and leave everything out, no packing up at night and no setting up in the morning. 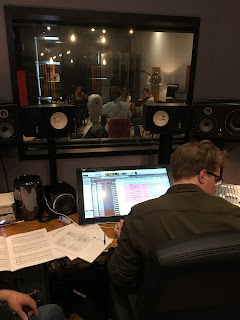 Day two started at 9am with me in the booth recording some piano for the first album then the first session with the quartet started at 10am and went until 1pm.  We started with my String Quartet No.1, went onto another piece for quartet and then in the 2-5pm session we went on to my String Quartet No.2.  It was great recording the acoustic stuff.  It's not something I do a lot of, and the "banter" (I hate that word when used non-ironically, but there we go) continued at very high levels.

For the evening session it was just me in the booth with Joe and Dan (and Peter) in the control room. I started by recording the remaining piano parts for the first album, including doing some passes using the felt setting, which is just lovely.  We then set up the Hammond organ in the main studio and I played that on a track too.  It was a noisy old beast but a joy to play. 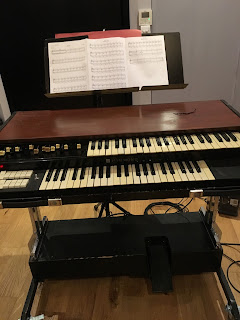 
The Joy of Real Players

As always, over the two days, it struck me just how much real musicians add to a recording. Especially players of the calibre I had at my disposal.  The love and the life that players add to a composers music cannot be measured or underestimated.  I think sometimes people think I'm a bit of a fraud or a bit wishy-washy in sessions when they ask about performance.  If I have a very set idea I will tell a player and when they ask specific questions about how this bar or that phrase should be played I'll answer.  But I often answer "Play it how you feel it" or "Do it how you think it sounds/feels best". This isn't because I don't know what I'm talking about (although I don't know what I'm talking about), it's because I know that a player knows their instrument better that I do.  There's also something about the different interpretations that a player can add upon reading your music.  It may not be what you had in your head but 90% of the time it sounds a million times better than you imagined.

And so, this week the task of editing the takes has fallen to me.  I have to say, Mr Rubel did such a great job of comping as we recorded that there's not a lot to do but I am checking through my notes and listening back to takes just in case there's some gold we missed in the hubbub of recording.  I can't wait to get into Pixel and get mixing so that we can release the albums and let you all hear the hard work and, hopefully, the fun we had making them happen.

Right, I better get back to editing.